There are many reasons for wanting to visualize the git graph. I think it’s one of the most helpful tools for understanding git, so try doing it before and after common git operations (see “suggested operations for learning” at the end). It’s particularly handy for those times you can’t avoid branching off another existing branch, like when multiple team members are working on the same feature. It’s still useful any time you’re collaborating with other developers in the same repository. It helps verify that a given branch is in compliance with the team’s branching standards, and can save a lot of headaches by revealing rookie git mistakes much sooner.

Whatever your taste, one of the tools mentioned above should work well. Try them out and use each when it makes sense. But I can almost guarantee that you’ll become overwhelmed trying to visualize a large number of branches.

Visualizing a few branches via CLI

To do this, set up a concise git log format of your choice. My favorite is slightly adapted from https://coderwall.com/p/euwpig/a-better-git-log:

Then the command for viewing the graph:

Nobody wants to press that many buttons, so set up an alias in your .gitconfig file:

so then you can just run git lg. This is my go-to command; I use it just as often as git status.

Here’s an example running this on a repo with many branches (https://github.com/vuejs/vue):

It’s helpful, but notice what happens when multiple branches have concurrent development. What branch does the yellow line belong to? How far will I need to scroll to see what branch it was based off of, and off which commit from that parent branch?

I think visualizing the git graph is one of the most helpful tools for understanding git, so try it before and after these common git operations. The basic git lg (alias for git log --graph --all) will work fine to visualize these:

Visualizing an overwhelming number of branches via CLI (Advanced)

I recommend most people stop reading here. But for the adventurous git geeks:

When visualizing a few branches, we have the luxury of viewing every commit. This becomes overwhelming when the repo has too many branches. Granted, we could explicitly specify a few branches like git log --graph master mybranch anotherbranch instead of using --all (which is certainly a technique I’d recommend when the following one is overkill). However, sometimes you want to see a condensed overview of them all, even if each branch has numerous commits. Here’s my solution.

Word of warning- the script runs in O(n^2) time, based on the number of branches. There’s probably a more efficient algorithm, but I haven’t investigated this yet.

Here’s an example running this on a repo with many branches (https://github.com/vuejs/vue): 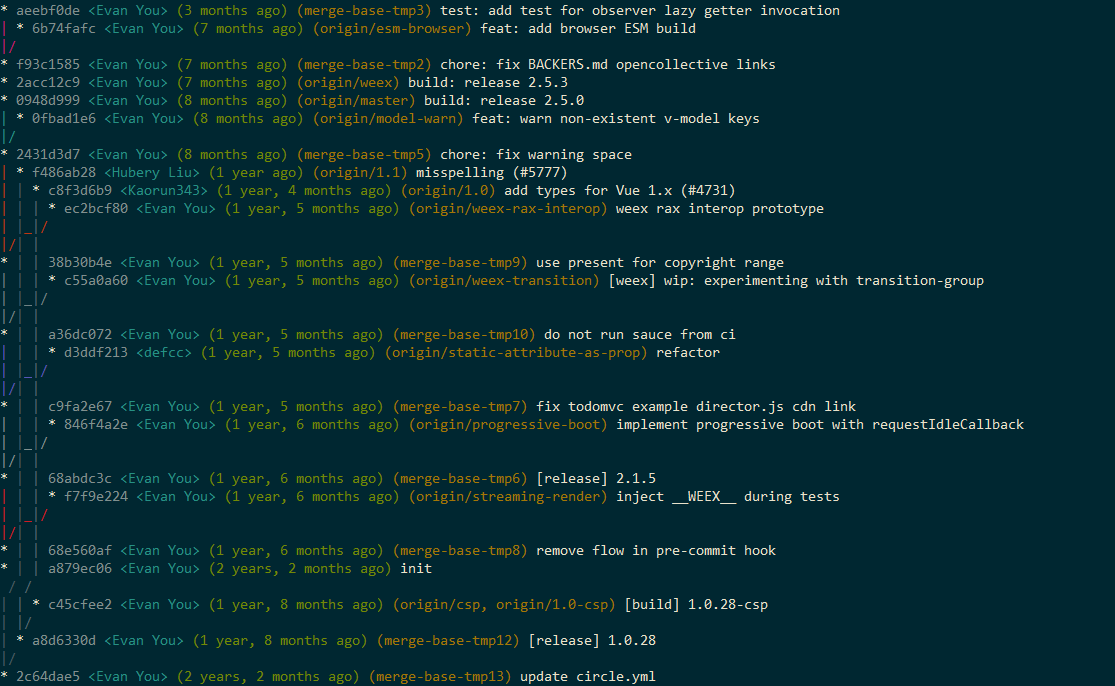 This is showing almost every branch currently in existence, all inside a single terminal window. Nice, right?

Git has a built in feature to simplify history. However, it discards all commits that don’t have a branch attached to them. This would cause many of the graph edges to disappear. By creating temporary branches at all of the merge-bases, we ensure that --simplify-by-decoration shows the relationships between all the branches, while still showing the most concise version of the graph possible.